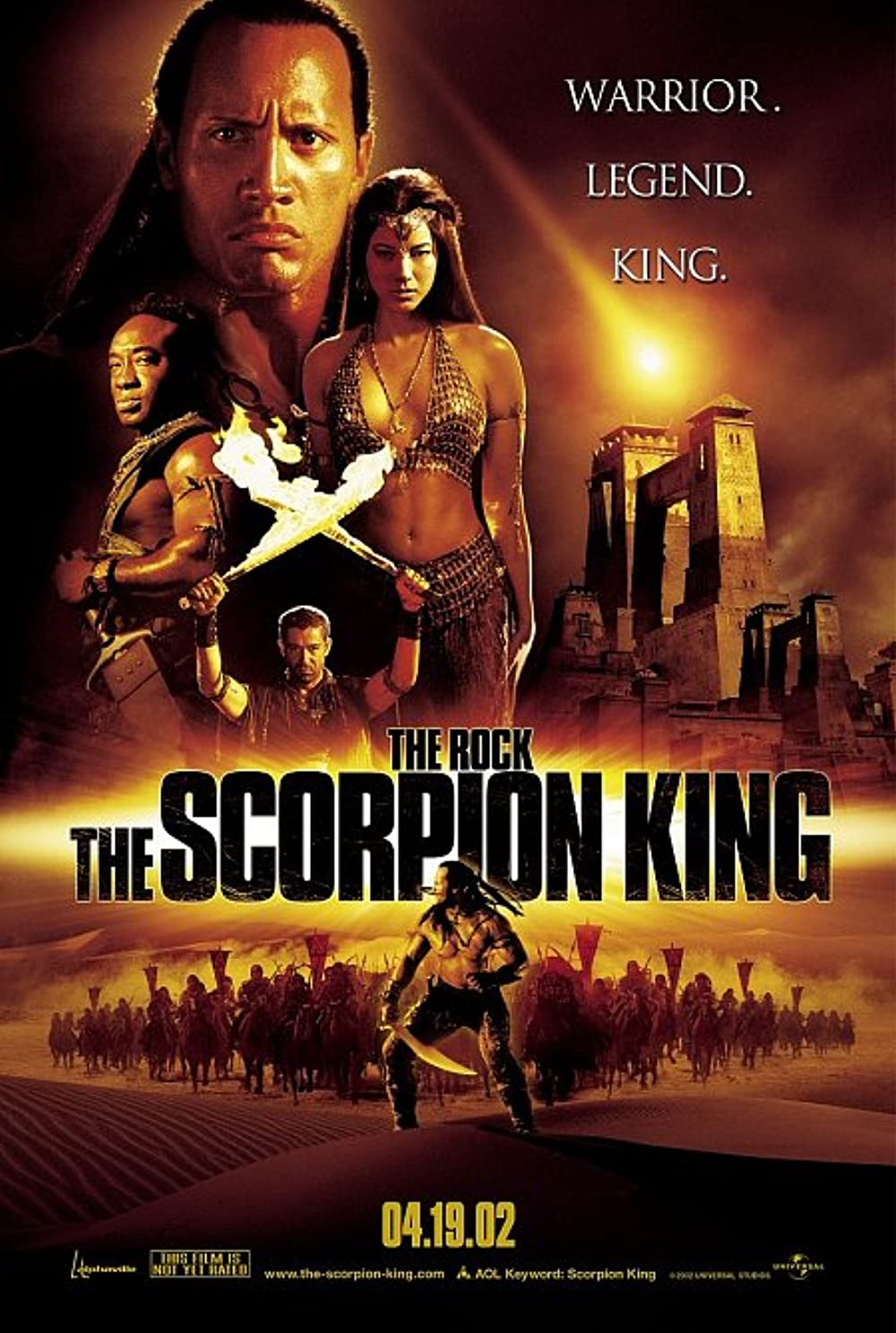 Before the time of the pyramids, a horde of warriors from the East, led by Memnon, invades and conquers the local tribes, only a few of which survive. Mathayus, his half-brother Jesup, and their friend Rama, the only three true remaining Akkadians, are hired by King Pheron of the free tribes to kill Memnon’s sorcerer for twenty blood rubies.

The Akkadians sneak into Memnon’s camp only to grapple with the guards due to having been warned by King Pheron’s son, Takmet having pledged his allegiance to Memnon and killed his father as proof of his betrayal, leaving Rama killed by an arrow shot and Jesup executed. Mathayus, in the middle of this, finds Memnon’s sorcerer, Cassandra, who predicts battle outcomes for Memnon and has been his prisoner since she was a child. At the end of the conflict, Memnon buries Mathayus in the desert to be devoured by fire ants at dawn. Mathayus escapes with help from a horse thief, Arpid, and desires to finish his mission and avenge his brother.

Mathayus sneaks into Memnon’s stronghold, Gomorrah, and enters Memnon’s palace with help from a street urchin. Memnon’s sympathetic court magician, Philos, directs Mathayus to the courtyard where Memnon is training. Mathayus tries to shoot Memnon from the watchtower, but instead saves the street urchin from having his hand cut off by Takmet under suspicion of theft and barely escapes Gomorrah, abducting Cassandra along the way. Memnon sends his right-hand man, Thorak, and a group of guards to kill Mathayus and retrieve Cassandra. Mathayus slays them all under the cover of a sandstorm and in a cave, helped by Cassandra saving Mathayus from a poisonous arrow shot via her magic.

Mathayus, Arpid, and Cassandra run into Philos, who escaped Gomorrah and has perfected an explosive powder. However, they are ambushed by the rebels, now under the rule of the Nubian King Balthazar. Though Mathayus defeats Balthazar in a fight and earns his grudging respect and sanctuary, Cassandra informs Mathayus that she has a vision of Memnon and his army slaughtering the entire rebel camp. Furthermore, she explains that if Mathayus faces Memnon, he will likely die.

The next morning, Cassandra returns to Memnon in order to stall and possibly kill him. Mathayus, with help from Balthazar, Arpid, Philos, and the army of rebels, launches an all-out assault on Memnon’s stronghold, facing Memnon personally before he can kill Cassandra. Balthazar takes on the full force of Memnon’s forces alone and kills Takmet during the battle, thus, avenging King Pheron.

The battle continues until Mathayus is shot by a guard, as predicted by Cassandra. As Memnon is about to claim victory, Cassandra kills the guard while Mathayus retrieves his bow and shoots an arrow at the exhausted Memnon, sending him off the edge of the roof and into a set of flames where he dies. Philos and Arpid use the explosive powder to destroy the palace’s foundation stone, bringing down Memnon’s forces. With the battle over, the remnants of Memnon’s army bow before Mathayus, who by their law is proclaimed the Scorpion King.