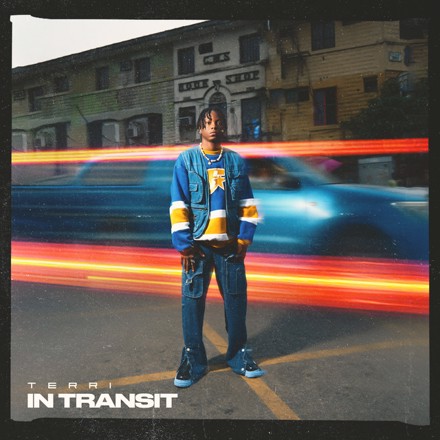 Long before his idol Wizkid signed him onto the roster of Starboy Music as Terri, Akewe Terry Daniel was making music as a teenager in the low-income Lagos neighbourhood he grew up in. Since trading the underground music scene for the mainstream, Terri has barely looked back.

With Wizkid’s anointing, he jumped on 2018’s “Soco”, one of the biggest anthems in and out of Africa that year. On the thumping monster hit “Ojoro”, lead track of 2020’s Afro-Series EP that was delayed by the pandemic, Terri ropes in themes of love as intoxication and for elevation.

That hitmaking recipe returns on In Transit, his second EP, and first as an independent artist. Buoyed by a Grammy nomination for his work on Wizkid’s Made in Lagos, he glides seamlessly across the tape with the intransigence of one who knows he is a superstar in transit.

That energy is present on “Holy Water”, where the woman of his dreams supersedes icons of both his faith and his industry; and it’s consolidated on “No Lie”, where he proclaims an unwillingness to share a love as deep as an ocean.