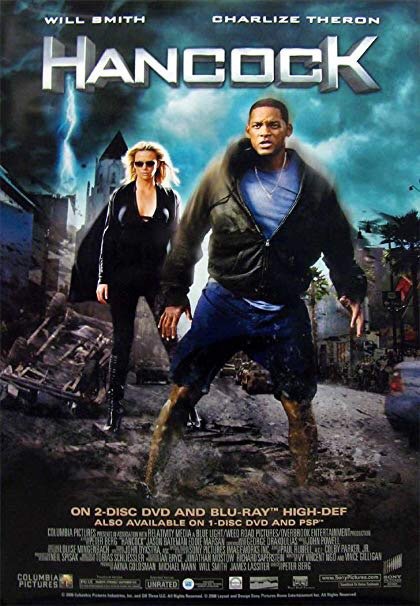 John Hancock is an alcoholic who possesses superpowers, including flight, invulnerability, and superhuman strength. While performing superhero-like acts in Los Angeles, he is often ridiculed and hated by the public for his drunken and careless acts, and becomes enraged when referred to as an “asshole”.

Hancock rescues Ray Embrey, a public relations specialist, from an oncoming train, which he irrationally derails to save Ray. Thankful and seeing him as a career opportunity, Ray offers to help improve Hancock’s public image.

Hancock meets Ray’s family, his son Aaron, who is a fan, and his wife Mary, who takes an immediate dislike to Hancock.

Ray encourages Hancock to issue a public apology, and then go to prison for a time, until Los Angeles needs him properly. Hancock reluctantly agrees, struggling to fit in at prison, and quickly causes trouble when he assaults two fellow inmates that refuse to leave him alone.

Hancock is visited by Ray, encouraging him to be patient. He is also later visited by Mary and Aaron who bring him homemade spaghetti.

The Los Angeles’ crime rate rises and Hancock is eventually released to help. He foils a bank robbery orchestrated by Red Parker, with Hancock slicing off his hand to prevent him from activating a detonation switch. He is praised as a hero and becomes popular.